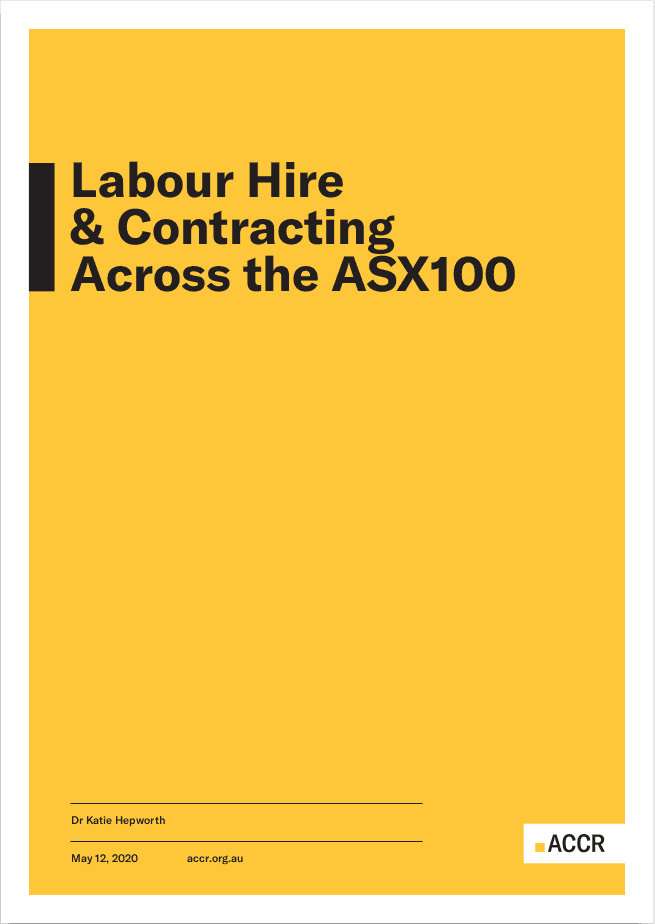 This section draws on a range of academic literature, government inquiries and reports to outline the most significant risks associated with the growth of labour hire. Key risks include:

Given these risks, investors should engage companies on their whole workforce, including both direct employees and labour hire or contract workers, in order to make judgements on the sustainability and appropriateness of their employment model.[1]

The International Labour Organisation (ILO) defines OHS as: “the promotion and maintenance of the highest degree of physical, mental and social well-being of workers in all occupations by preventing departures from health, controlling risks and the adaptation of work to people, and people to their jobs”.[2]

A poor OHS record can erode company and shareholder value. It can lead to increased compensation premiums, decreased productivity and delays,[3] absenteeism, higher health care costs, potential lawsuits, negative publicity, reputational damage, and a loss of investor and consumer trust.[4] It may even decrease access to external capital.[5]

The increased vulnerability of labour hire workers to occupational injuries, accidents and poor health is due to a range of interrelated factors affecting contingent workers, including:

Wage theft and modern slavery anywhere in a company’s value chains can lead to negative publicity, public campaigns, and a loss of consumer confidence that can have a negative impact on shareholder value. This can be seen from growing public attention and even boycotts by consumers in response to several high profile “wage theft” cases.

There are an estimated 15,000 people living in slavery-like conditions in Australia. In high-risk sectors, like commercial cleaning, non-compliance with labour law is endemic and often severe, and is linked to a range of factors including:

Modern slavery exists on a spectrum of labour exploitation and abuse. Wage theft and excessive working hours can quickly deteriorate into modern slavery through threats and coercion, with some workers particularly vulnerable to falling into slavery-like conditions.[19]

A number of legal and other compliance initiatives have emerged in recent years, in order to address modern slavery and labour exploitation risks in supply chains, and to prevent lead companies from “outsourc[ing] their noncompliance”.[20] These include:

The Commonwealth Modern Slavery Act (MSA) came into effect on 1 January 2019. The MSA requires Australian businesses with a revenue of at least AU$100 million to submit annual reports on the risks of modern slavery to their supply chains and operations to a central, public register. For companies reporting on a financial year, their first reporting period will end on 30 June 2020, and they will be required to report by 31 December 2020.[21]

There are seven mandatory criteria that must be included in a reporting entity’s modern slavery statement. These include a description of the risks in the entity’s operations and supply chains, the actions taken by the entity, including any due diligence and reporting processes, and how the company assesses the actions they take.[22] ACSI has produced detailed guidance for companies and investors on the Act and its implications for reporting and engagement.[23]

The FWO has paid increasing attention to the responsibility of lead companies in a supply chain for labour rights violations by their suppliers and labour hire providers. They have two mechanisms at their disposal:

Labour hire licensing schemes were recently established in Victoria, Queensland and South Australia to increase barriers to entry for labour hire providers, and reduce rates of non-compliance. The schemes include significant penalties for providers who operate without a licence and for host companies who utilise the services of unlicensed labour hire providers. Each state-based scheme defines labour hire services, and outlines who or what is considered a labour hire provider.[26]

All three schemes capture a variety of intermediary working arrangements, including different types of service providers such as contract cleaners.

Reviews of workplace compliance initiatives in global supply chains have found that voluntary self-regulation and “private compliance initiatives” (codes of conduct, auditing, etc.) are insufficient to effectively manage business and operational risks from labour violations in supply chains.[27] Research has found that workplace audits alone are insufficient for identifying and understanding workplace issues such as harassment, wage theft, excessive overtime, and freedom of association violations, and that auditing can capture “distort[ed]... realities of a workplace”.[28] Audits are also limited in identifying modern slavery.[29]

By contrast, multi-stakeholder initiatives, which actively involve workers and their representatives in compliance measures, have been shown to be effective in addressing labour risks.[30] These initiatives often support workers to raise workplace issues early, allowing businesses to resolve them “before they escalate into more lengthy and complex disputes that may come at a high cost”.[31]

An example of a multi-stakeholder agreement that includes an active role for workers, the Cleaning Accountability Framework, is discussed in Section Four.

“Two-Tier” Workforces and the Loss of Human Capital

The use of labour hire can result in the creation of a “two-tier” workforce, where labour hire workers do not receive the same wages and conditions as the directly employed workforce. Conditions that are not extended to the labour hire workforce may include holiday leave, access to training, security of employment, and even wage rates.

Under Australian law, enterprise agreements that cover direct employees do not apply to the labour hire or contractor workforce. These workers must negotiate a separate agreement with their direct employer. While host companies can choose to extend the same conditions to labour hire workers and contractors, in practice this is rarely done. As discussed in detail in the mining section, labour hire workers can earn as much as 30% less than permanent employees working side-by-side in the same job on the same site.

A two-tier workforce may have negative, material impacts on a company. It may impact on:

...the ability to generate a positive culture throughout an organisation. Subsequently, this risks having a damaging impact upon staff morale, potentially resulting in higher attrition rates and thus higher recruitment costs for employers.[32]

If the creation of a two-tier workforce undermines a company’s ability to retain human and intellectual capital, any immediate cost-benefits that stem from this structure may be outweighed by the broader impacts to productivity, and costs associated with recruitment and retraining, with impacts on long-term value creation.[33]

Furthermore, where equivalent training is not extended to the labour hire workforce, this will result in long-term deskilling of the overall workforce—particularly in sectors such as mining, that require a relatively skilled workforce and where labour hire makes up a majority of the workforce. Additionally, where companies choose to engage workers on short-term contracts (either through labour hire, or individual contracts) to carry out specialised or skilled work, this can erode or undermine the skills development of the company’s permanent workforce. When particular skills are siphoned away from the permanent workforce in this manner, a company’s workforce loses opportunities to upskill, and to progress into higher skilled roles.

While casual work and labour hire are distinct categories of precarious work, there is significant overlap between these categories. In the commercial cleaning sector, most—if not all—contract cleaners are also casual. Similarly, an increasing proportion of contract mine workers are hired on casual contracts and have no access to sick leave.

The COVID-19 crisis has highlighted the risks to individual workers, communities and businesses of a significant percentage of workers having no access to paid sick leave. Many workers without sick leave cannot afford to self-isolate, or to take other necessary precautions to protect themselves and others. In early March, newspapers reported on a hospitality worker who had gone to work at the Hobart casino, despite being told to self-isolate awaiting tests for the virus.[35] As a low paid casual worker this person stated that he could not afford to quarantine without having access to paid leave.

A number of employers have recognised the risks to their entire workforces if all staff cannot afford to quarantine due to a lack of paid sick leave and have extended paid sick leave provisions to casual staff.[36] However, in almost all cases these schemes have not been extended to labour hire workers and contractors.[37]

Diversity is an “essential component of sound corporate governance and critical to a well-functioning organisation”.[38] Companies with strong gender and racial diversity tend to outperform peers on a range of financial metrics.[39] Furthermore, a failure to adequately implement sound Equal Employment Opportunity (EEO) policies may lead to increased recruitment, reputational and legal risks.[30:1]

ACCR’s review of company reporting on gender and Indigeneity found that reporting was focused on employees only. This diminishes investor oversight of the overall workforce composition, hindering engagement and the mitigation of risks associated with a lack of diversity. It also impacts investors’ ability to assess the efficacy of a company’s diversity policies and targets.

ACCR reviewed the reporting documents of 10 mining companies (see Appendix). While 80% of companies analysed provided reporting on the gender division of their employees, only 20% of companies provided any information on the gender division of either their labour hire or contract workforce. As labour hire workers are estimated to earn up to 30% less than permanent employees, the failure to report on gender diversity in permanent and labour hire roles means investors are unable to adequately judge a company’s gender pay gap.